Group winners across our 3 breeds

Welcome to our website and the on line home of Glenariff Pointers, Clumber Spaniels and Miniature Smooth Haired Dachshunds.

We trust you will enjoy looking around and reading about us and our dogs.

A visit to our whelping box will show you that we are we are not commercial breeders. Our emphasis is on quality rather than quantity and  occasionally have puppies available to permanent loving homes.

Memphis is a Group winner at Bull Breeds

We had a great day at Bull Breeds with Memphis not only winning another Green Star and Best of Breed but going all the way to win the Group.

Thrilled to bits for Xander who today at South Wales Kennel Association show won his class and then the CC and Best of Breed under judge Honor Talbot.

END_OF_DOCUMENT_TOKEN_TO_BE_REPLACED

About Us and Our Dogs 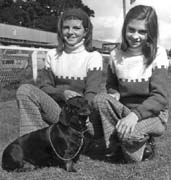 We are sisters, Caroline Reynolds and Wendy Fleming and we each have a separate interest in the Glenariff Affix.

Glenariff, meaning arable Glen, is one of the Glens of Antrim in Northern Ireland were we both grew up and live and have enjoyed for many years. All our dogs have run in the woods surrounding the glen and have got their feet wet in the clear waters of the streams there.  A special place in our hearts.

There has always been dogs in the family and we have be involved with breeding and showing as long as we can remember. As kids we grew up with Standard Smoothhaired Dachshunds, shown under our mother’s affix Craigmore.

Caroline met Clumber Spaniels for the first time on a visit to Crufts in 1989. That was the start and Caroline has not be without a Clumber in her life since.

For Wendy, a move out of Belfast to the countryside in 1996 was the opportunity to have a dog. Lily, our first pointer joined the household as a rescue of just 7 months old. She soon settled in and was happy stretched out in front of the fire where Pointers seem to congregate.

Our most recent additions to the show team are the Miniature Smooth Dachshunds. Our mum, Sandra, had this breed for several years and decided to join us showing when looking for a suitable sire for Dilly’s litter. This litter of 5 was born in December 2002 and we could not help keeping both Lulu, a shaded red, and Eva, a black and tan. Lulu was a star and became our first Champion in the breed. The rest as they say is history!

We have made friends as a result of our dogs and over the years have had a lot of fun and success with our dogs.

And most recently Dave winning BIS 4 at the Irish Kennel Club International in October 2014 and Lucy winning Group 7 at the Bleiswijk International show in Holland in November 2014. 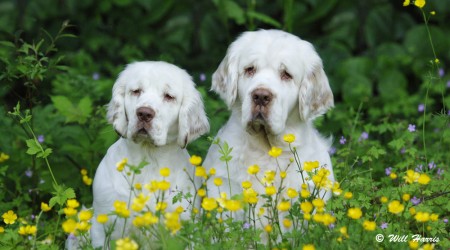 Clumber Spaniels have been part of our family since 1991 after a long wait when we collected Sophie just 5 days after Garfield, Sh Ch Raycroft Socialite, won Best in Show at Crufts in 1991. Although bought as a pet it was was with Sophie that we got the show bug and ‘learnt the ropes.’

Elliott, our first dog, was a gentleman and a wonderful dog to live with and show. We knew we had a special boy when he went Reserve Best Puppy in Show at our first show, Hampshire Gundog Society, at just 6 months and 2 days old. He gained his title in Feb 1995 and took Best of Breed at Crufts 2000 from the veteran class. A very special day that we will never forget.

Emily joined us in 1994. Emily loved people and certainly liked to be the centre of attention. She was consistently placed at shows and even in Veteran classes enjoyed every outing. Emily was Best Veteran in Show at the Clumber Show open show in 2003 where her daughter Georgia went Best in Show.

Emily and Elliott were mated in 1998 to produce our first litter. We were always going to keep one and Georgia was it. Our “Sweet Pea” was our first homebred champion and everyone’s friend. She was a joy to live with and never stopped trying to please.  A very special girl that will live in our hearts forever.

Romeo, born December 2004 joined us a puppy. We are grateful to Jenny Langridge (Badgersmoon) for breeding such a happy outgoing dog and allowing him to come to live in Ireland with us. A great character and very lovable dog. His only fault is his selective deafness!! Now a veteran he is now co-owned with his breeder Jenny and is currently living with her in Wales.

Matthew is our joker!  He is great at daft looks, daft actions and is just daft! He is however a showman when he puts his mind to it but only for his mum. Together they have proved a winning combination. He gained his Irish title and several group wins at Championship level. In 2011, aged 4, we attended his first UK show where he took the CC and gained a second CC at Three Counties in 2012.

Darci joined our team in March 2012 and settled in at home from day one although home is somewhere she would prefer to be. Not an outgoing show girl she overcame her shyness to gain her Irish title in 2013

The youngest member of the Clumber team is Xander who joined us in October 2013. He was bred in Holland by Anton and Jolanda Stoop (Wyclydo’s) in collaboration with Connie Holt (Companionways) in USA. This young man has exceeded our expectations. At 11 months old, and attending his first Championship show in Ireland, he not only took Best of Breed but won the Group at Fermoy International show and the following weekend went to his first show in the UK winning Best Puppy in Breed and then Puppy Group 2. We look forward to campaigning this young man in 2015.

We started in Pointers with the arrival of Lily – a seven month old rescue dog in need of some love and attention. She settled in quickly and was quite at home on the sofa beside you or stretched out in front of the fire.

To get Lily socialised Wendy decided to join a training class. Obedience she thought, but they won a rosette at the ring craft match and several people enouraged her to show and that was that!

Together Wendy and Lily learnt the ropes, so to speak and for a rescue dog did really well with several Best of Breeds to their credit.

As Lily matured Wendy was ready to have another Pointer to keep her company.

December 2003 saw Heather from the Hookwood Pointer kennels of Sue Welch join the team. Heather was a joy to show and won well throughout her puppy classes in 2004. She won a CC at Belfast Championship show in 2006 and won a total of 34 Green Stars. Sadly we had to say goodbye to her at Christmas 2009 at 6 years old.

Basil also from the Hookwood Kennels joined us in  and has taken to showing like a true professional. He has just loved it from his first outing to ringcraft.

The latest addition to the Pointer team is Tara who we collected from Mike Turner, Rafthouse, in November 2014.  A really happy, easy going pup. We look forward to showing her in 2015